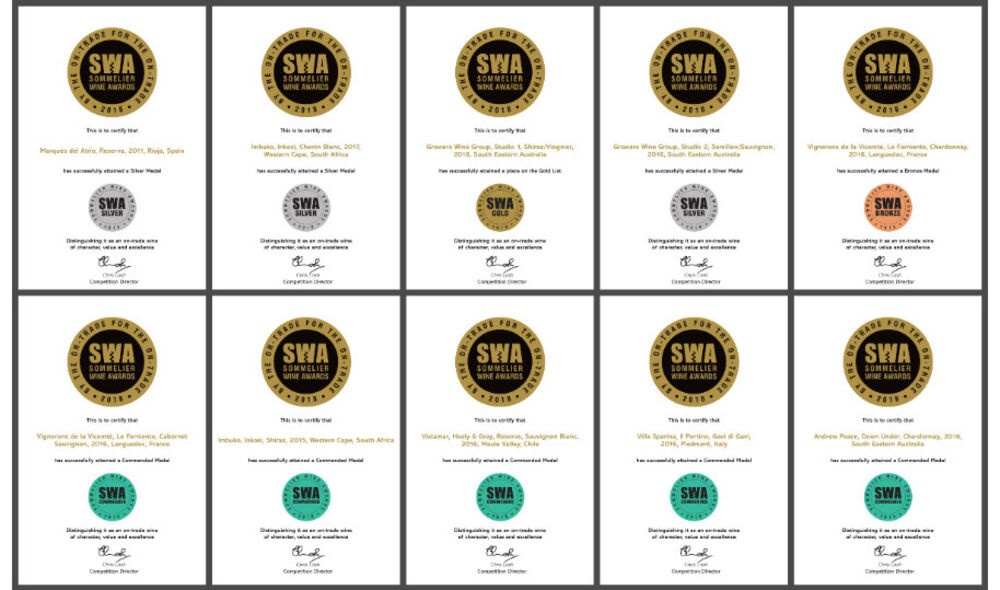 LWC has just announced the results for their wines entered into the Sommelier Wine Awards 2018 (SWA), and it’s been another great year!

The SWA is Britain’s only on-trade wine competition and, now in its 11th year of judging, it just gets more and more prestigious and competitive. Judging took place over 3 weeks and consisted of blind tastings by some of the best sommeliers and wine consultants in the country, who made their assessments based on food friendliness, versatility, typicity, personality and value for money.

Studio 1, Shiraz/Viognier was awarded a gold certificate. Judges called it a “great-value gold”, appreciating its “plum, raspberry, mocha and spice notes”, in the words of leader Angela Reddin. Angela went on to point out “some barbeque smokiness on a raspberry palate”, while Sumita Sarma of Sumilier described it as “stewed in good typical style, with some impressive fruit intensity backed by vanilla, toast and smoke characters, and leading to polished ripe tannins with a spicy finish”. They concluded with food pairing, asserting that it would be a “good crowd-pleaser with roast lamb”.

Silver certificates were awarded to Studio 2, Semillon Sauvignon, with its herbal, citrus nose and creamy finish. Inkosi Chenin Blanc was praised for its crisp and refreshing style as well as its floral notes and a little biscuit character. Finally, Marques del Atrio was described as a very spicy wine with cinnamon and liquorice notes; Stefano Barbarino found it to be quite chocolatey but with good acidity, and a good pairing with pork.

Le Farniente Chardonnay was awarded a bronze certificate. It was described as slightly floral and a little pithy; Mikolaj Harmider of Adam’s Restaurant liked its simple, fresh style, with citrus and steely minerality. It was also stated by team leader Sarah Jane Evans that this wine could definitely be a house wine.

These examples make up just a small selection of the wines we have on offer at LWC. The recognition and awards that our wines receive year-on-year speak volumes about our dedication to providing customers with real quality.

All rights reserved © 2020 | Website brewed and distilled by Venn Digital